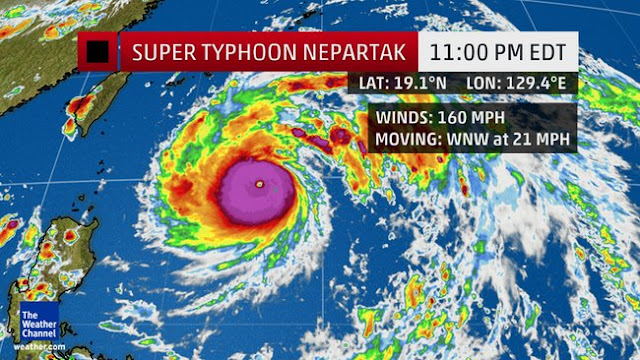 In China, this recent week a heavy rain killed dozens and submerge massive flood in the county, But China is bracing another calamity for a super typhoon on Thursday.

The Typhoon Nepartak is barreling towards Taiwan, packing winds of more than 163 mph, is expected to make a landfall on Taiwan early on Friday. This super typhoon is set to add more misery in China, stated in news agency Xinhua.

The Taiwan had put 35k soldiers on standby for this arrival of the storm, Taiwan’s defense ministry said.

The China, in the eastern provinces areas of China were bracing for high winds and heavy rain, canceling train services and ferry while fishing boats were ordered to return to port command by the authorities.

Also in Wuhan, a central city has reportedly experienced the heaviest rainfall on record and has been put the area on red alert by the authorities.